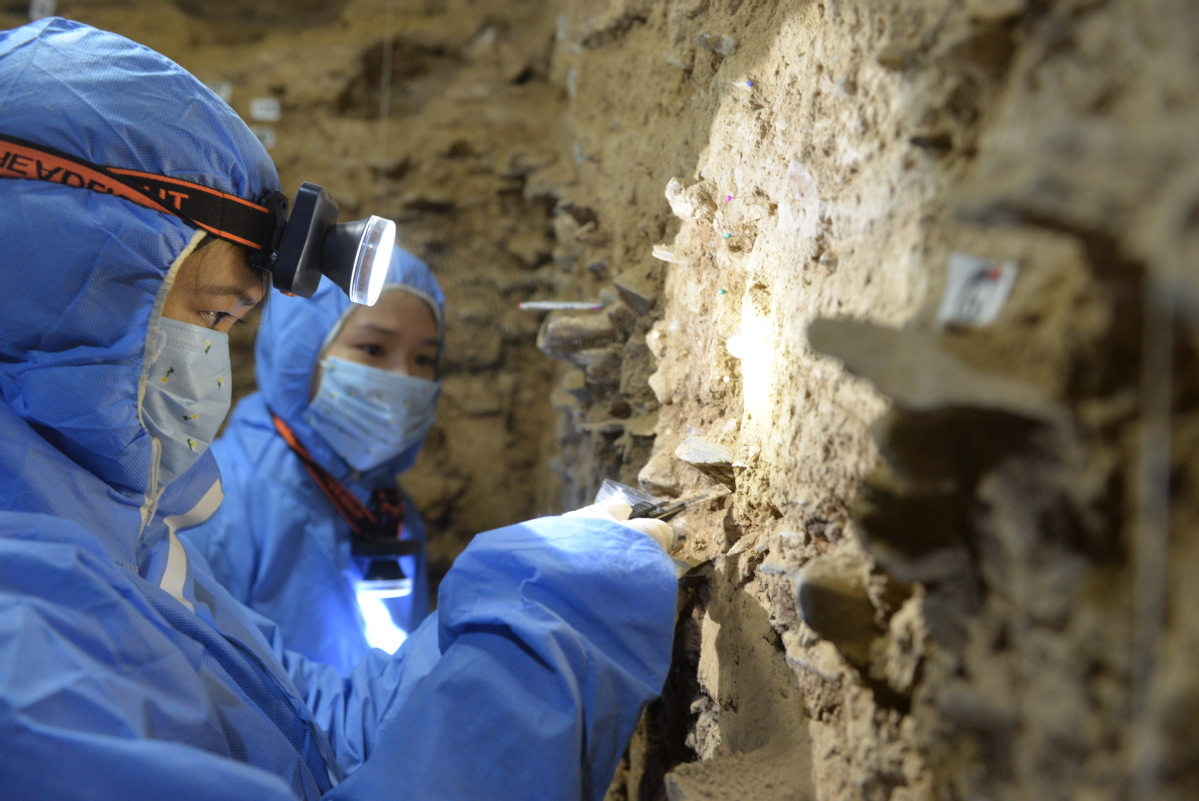 New DNA findings support evidence that a group of extinct, ancient relatives of modern humans continuously occupied a karst cave in Gansu province tens of thousands of years ago, a finding that could have an important effect on the story of early human development.

The new DNA evidence came from layers of sediment in the Baishiya Cave in Xiahe county, about 3,200 meters above sea level.

Now, in the lab, the team recovered ancient mitochondrial DNA, which was extracted from sediment from 100,000, 60,000, and probably 45,000 years ago, showing a continuous link to the human species.

Last year, scientists reported that a fossilized human jaw had been discovered in the karst cave in Gansu, and its estimated age was 160,000 years ago according to radiocarbon dating. While researchers said they could not take DNA from the jaw and analyze it, they managed to isolate proteins from a molar and compare it with other species. The closest match was a group called the Denisovans.

Denisovans get their name from Denisova Cave in Siberia, Russia, where archaeologists in 2008 unearthed a pinkie of a girl dated to more than 50,000 years ago－a member of a new human group. The group was also found to have co-existed with Neanderthals, the extinct, archaic human species which once dominated today's Europe.

The new DNA findings support last year's discoveries from analysis of the jaw.

"Filling an academic gap, it will greatly help us figure out the evolution of human beings in East Asia and the origins of modern humans," Zhang Dongju, a professor from Lanzhou University in Gansu province and a leading scientist of the program, said at a meeting organized by the National Cultural Heritage Administration in Beijing on Friday.

The fossilized jaw had been accidentally found by a monk in the 1980s in Baishiya Cave, which has been honored as a holy site for local Buddhist pilgrims.

Zhang and her team began field research in Baishiya Cave in December 2018 and had done archaeological excavation of the strata at three spots within the next year. She told China Daily that over 10,000 "specimens", like stone tools and mammal remains, which are signs of human activity, were collected.

"Fortunately, the layers of strata in the cave are little disturbed and basically remains as they were," she said. "We can thus build a timeline of the cave dwellers."

Chopped and burned animal bones, for example, are strong evidence of human settlement, Zhang explained, and such materials were found in the cave and dated from 190,000 years to 30,000 years ago.

"It took this common-looking earth to uncover epoch-making discoveries on the history of human beings," said Song Xinchao, deputy director of the National Cultural Heritage Administration. "The project has reshaped many people's understanding of archaeologists' work."

The discoveries may have even greater significance.

Wang Youping, an archaeology professor at Peking University, hailed the Baishiya site as producing one of China's biggest archaeological discoveries, with global significance, in recent years.

"The challenging natural environment on the Qinghai-Tibet Plateau once made us think that human settlements appeared there relatively later, migrating from other places with better living conditions," Wang says. "However, we're now told that is not the fact."

Zhang also said the genetic adaptations to high altitudes seen in the modern Tibetan ethnic group may be associated with Denisovans, who now appear to have long occupied the region.

She said the recent research looks to have exposed the "tip of the iceberg" of Denisovan life. More fossils and possibly DNA of other archaic humans may be uncovered in future excavations.

According to what is called the Out of Africa hypothesis, the mainstream theory in the West is that modern humans have a single origin in Africa. But recent discoveries offer another theory. The findings in Xiahe, indicating Denisovans may once have been widely distributed in Asia, provide more evidence.

"Denisovan dwellers in the cave remained for a long time, throughout the tough conditions of the Ice Age, during which many archaic human species were once thought to have failed to survive," said Chen Fahu, an academician of Chinese Academy of Sciences. "This will open up more possibilities for future exploration of the relationship between the natural environment and human evolution.

"Further research may greatly assist the study of the ancestry of modern human beings not only in China, but also in the rest of East Asia, Southeast Asia and even for Native Americans," Chen said.

In spite of the excitement of the Chinese a rchaeological circle brought by Baishiya site, Song from the national administration said upcoming excavation will not be done on a large scale as analysis of the findings continues.

"It will take decades and years of patience to bear more fruit," he said.